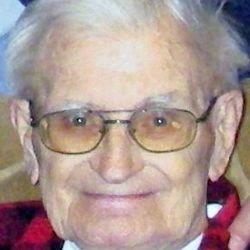 Ludwig F. Tyrian, 93, of Charlotte, NC, formerly of Baldwin passed away on February 20, 2015. Born on May 27, 1921 in NYC, Lou was the son of the late Frank and Rose Tyrian. He Grew up in the Lower Eastside and was a member of the Boy’s Club of NY for his entire life. He served with the US Army Air Corp, 8th Air Force during World War II as a bomber mechanic. After the war, Lou moved to L.I. and settled in the town of Baldwin. He worked at the Eagle Pencil Co. in NYC, then was a machinist for Ail Eaton working in the plants in Deer Park, Farmingdale & Melville. He retired from Ail in 1985 after 28 years. He was best known as the “Music Man” playing as a disk jockey for parties on L.I. and in the city through the late 50’s, 60’s and 70’s. He moved to Charlotte in 2003 with his son Louie to be closer to his son George. Mr. Tyrian was preceded in death by his wife Mary Bausch Tyrian. Survivors include his sons George and Ludwig “Louie” Tyrian, nephew Joseph Tyrian, Jr. and niece Roseanne Lowry. Reposing at the Fullerton Funeral Home, Inc., 769 Merrick Rd., Baldwin, NY on Friday from 6-9 p.m. Religious Service on Friday 8:00 p.m. at the funeral home. Interment Saturday at St. Charles Cemetery. Memorials may be made to the Dickson Heart Unit c/o Carolinas Healthcare Foundation, 1221 E Morehead St, Charlotte, NC 28204. fullertonfhny.com

Posted by Penny Pucci on Mar 4th, 2015
Mr. Lou, as he was affectionately known to me and my family, was a very special friend. He was a blessing to my late husband, Ralph. Mr. Lou will be missed and will always have a very special place in my heart.