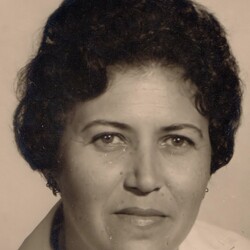 Lucienne Audain was born on May 14th, 1921 in Port-Au -Prince to Marcel and Aline Audain and was the oldest of four children, Ghislaine, Simone, and Fritz, all deceased. She attended primary and secondary school at Sainte Rose de Lima. At the urging of her English Grandfather, Antoine Audain, she matriculated at Immaculate Conception College in Jamaica, a branch of the Institutes of Birmingham, U.K.

Lucienne later returned to Haiti where she began her career as an administrator at the Point Quatre (USAID) for about 6 years. After this time, Lucienne immigrated to the USA, settling in, Washington, D.C where she worked at the US Agency for International Development.

Later she was transferred to the French territories of East Africa includingConakry, Guinea, andDar es Salaam to administrate the relief effort taking place. She worked in cooperation with the US embassy and among her many functions, organized events for the diplomatic core present there.

After a few years, she returned to NY where she worked on the World Council of Churches as a Human Resource manager. Later she worked at SOA, a French import company as their bookkeeper. Afterward, she worked at the Bank International in Luxembourg as an office manager. After completing a successful career abroad in several countries, she then retired.

Lucienne traveled to Vietnam, Italy, Spain, and France enjoying her life and impacting many people through her humanitarian work.

She was also an active parishioner from the 1970s up until her stroke in 2016 at the Church of St Bartholomew in Elmhurst, NY where she was an Extraordinary Minister and taught Catholicism to new converts.

She had a fierce loyalty to her family and helped raise and guide her nephews, Fritz (Tony), Reginald, and niece, Mireille throughout her life. She also provided love and support to her great-nephews Vincent, Anthony, Reginald Jr., great-nieces Vanessa and Nicolette, and eventually her niece-in-law Colette. She was an extraordinarily strong woman, highly opinionated, and especially an inspiration to her great-niece Nicolette.  An excerpt from her college entrance essay reads:

“My great aunt Lucienne is 98, the fiercest dame in nursing home care and the only patient with her original hair color. At times highly opinionated and sharp as a bullet, she defied all expectations. Always tight-lipped, my French great aunt never disclosed the details of her colorful life and the people she met. She was vague about the work she did for the American government assisting newly independent countries against Communism. She was a multilingual, experienced manager, transferred from the US Embassy in Haiti. I found her passport in an old closet filled with visas from Vietnam, Thailand, the Ivory Coast, and Guinea. As a child, I saw her as an uptight old lady; with this newfound information, I now admire her bravery. Our conversation would begin with her favorite line:” When I was in Africa…..” Lucienne would sit at my kitchen table peering out the window, sipping her favorite espresso, correcting me on my French pronunciations as I flood her with questions.  She was an unmarried woman in the 1950s, who left her island homeland. Rather than fulfilling the gender roles of marriage and family, she traveled the world. She was surprisingly secretive about it-- why?  How did she have the courage to defy traditional roles? What ambitions inspired her to work in foreign countries? Did she feel liberated as a woman, to fulfill her intellectual aspirations? Lucienne paved the way for me to boldly conquer my goals, and I intend to continue her legacy of defying and exceeding expectations”.

Her passion for helping others was expressed throughout her life as she impacted us all. We will miss her positive energy, her many stories of growing up in Haiti, her family, her international work, and her travel. We are sure she is resting peacefully in heaven above, just 11 days shy of reaching her 100 Birthday, still a rare and special accomplishment.

Live Stream of the Funeral Mass


View the LifeTribute for Lucienne Audain