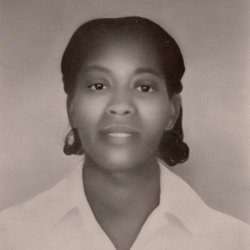 Eleanor Cornelia Ford Simmons, daughter of the late William & Mary Ford was born in Summerville, South Carolina on July 22, 1921. She was the youngest of six children.  Eleanor was peacefully called home on June 11, 2011.  Ellie, as she was affectionately called, spent most of her childhood years in Summerville.  Eleanor worked with her mother on their farm. She left Summerville in her early teen years to live and work in New York. It was there she worked as a nanny, a housekeeper and at A. Holly Patterson Nursing Home, but her biggest joy was being a wife and mother.

She attended the Freeport Church of God. It was there that she was introduced to the late James J. Simmons.  They were baptized together in the Freeport Bay and on November 12, 1939 were married by Rev. William B. Hull. During the course of their 67 years of marriage they raised five biological and nine chosen children.

In the late 1970’s, Eleanor lost the remainder of her vision. However, she did not let that be a deterrent
from anything she put her mind to do.  She earned her degree from IHB, an institute for the blind, and
continued on to other vocational schools for the blind. She continued to attend the Freeport Church of God and was a member of the choir and other auxiliaries for many years.   Eleanor loved to help people especially children. She was even interviewed in the local newspaper for her willingness to adopt hard-to-place children . She believed that God gave everyone a purpose and that was hers.  She worked with many agencies taking in children of all ages, including Vietnamese and Amerasians. She and Jim also provided a home to the elderly for a while.

Ellie loved to listen to music. Her favorite was Mahalia Jackson.  She also liked to listen to informational and inspirational radio programs. In the kitchen, she cooked a “mean” pot of “Red Rice” which was quite
frequently requested for church functions.