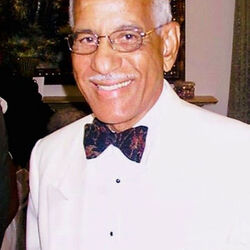 Cuthbert attended The Anglican “Hinsie” School in St. Georges.  He was a diligent student and talented multi-sport athlete; One of Grenada’s best basketball players with Amsel Bears. Barnes was also a stellar soccer player  eventually playing First Class soccer for  Sporting Club before moving to play for Honved Football Club. Barnes was most proud of being selected to the Grenada National Soccer Team in 1956. He eventually became National Team Captain and later  was selected as Manager Grenada National Soccer team. He also played Cricket with Queens Park Cricket Club. Cuthbert has been acknowledged as one of Grenada’s best sportsmen/athletes.

He married Audrey Cicely Jacobs also of St. Georges, Grenada in 1955. Together they built a  family centered life in Grenada. They bore and raised eight children. Family was always first and foremost to both Audrey and Barnes. He was a man with strong faith and conviction, who firmly believed in charity and helping those less fortunate that himself.

Barnes had an engaging personality with a sarcastic sense of humor. He had the ability to make and maintain friends and had many loyal life long friends many going back from his childhood, travel and charity. He believed he was blessed and was always willing to share his blessings.

Cuthbert was always seeking better ways to provide for his family. He eventually became a Salesman for Central Sales in Grenada, a job which required him to travel the Windward and Leeward Islands at least annually.

At Central Sales he grew personally, professionally and had a very successful career. Each time he returned from his trips he would be sure to have brought special treats for each of his children, who looked forward to his return.

Driven by concerns for his children about his family’s future and creating opportunities he rolled the dice andin early December 1967 Barnes left the comforts of Grenada to migrate to Brooklyn City. Before leaving Grenada he also planned and prepared  for his family’s exit from Grenada. He secured their visas and booked their passages to follow him to New York on January 28, 1968; an ambitious plan. On January 28, 1968 his family was whole again in New York their new home a mere two months after he left Grenada. Barnes asked why at 35 years old, would you leave your home where you’ve done well to move somewhere else and start over? He would say, “I looked at my children and asked: where can they have the best opportunity for success in life”? This is reflective of the person he was, his family’s well being  was always first and foremost.

In New York his first job was that of a Salesman at A&S Department Store. He then leveraged his penchant for numbers and re-invented himself to find his way to Franoren Shipping Corporation, Ingersol Rand Co. and then to Mercon Coffee Corporation and De Sola Bros, Inc. on Wall Street. He excelled as a Traffic Manager at DeSola Bros. and served as trusted member of its Management Team and Corporate Secretary until his retirement in 1994.  After retiring Barnes and Audrey moved to Virginia where he found his love for gardening, winning Yard Of The Year several times. In Virginia he joined a church where he sang in the choir, made new friends who nicknamed “Cutty”.  He also became an  active  member of the subdivision home owners association. Upon the passing of his beloved Audrey he moved back to New York to be near his family.

Barnes viewed his biggest success as the solid foundation and opportunity he and Audrey provided for their family of ten. A legacy of sacrifice, perseverance, charity and mostly commitment to family. He would share his life experiences with anyone who would listen recounting stories about what is was like growing up in Grenada during  WWII when food was rationed. His experience during the devastating Hurricane Janet tore through Grenada  destroying their home and all their possessions  He related that those experiences helped shape into the person he became; faithful, loyal and charitable. He lived by the philosophy of “perseverance”, the name hewould give his home in Grenada which he rebuilt after Janet.

Mr. C as the neighborhood children called  him was a mentor to numerous young people throughout his life, sharing sage advice and wisdom to them. Never judging, providing leadership, guidance and direction to help them chart their path through life.

Cuthbert is preceded in death by his wife and soul mate Audrey, his brothers Arthur, Kenneth, Charlie, Irving and Winston and sisters Myrtle and Eurania.

Memorials may be given to St. Jude’s Children Hospital.