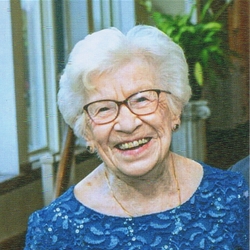 Bertha Elizabeth Bonelli of Baldwin, NY, 98, passed away after a rich and full life on April 15, 2021.  Bert was born in Sydney, Nova Scotia, Canada on October 23, 1922, to George and Nora (Donovan) DeCourcy. She graduated from St. Joseph’s Hospital School of Nursing in Glace Bay, NS in 1945 and pursued a short career as a registered nurse (RN), at hospitals in Canada and New York City prior to becoming a full-time homemaker and devoted mother to her children in 1954. Bert married the love of her life, Richard Bonelli, in 1953 and they enjoyed 64 years of marriage until Richard predeceased her in 2017. Mom will be remembered for her kindness to all, soft-spoken demeanor, quick wit and subtle sense of humor. Survived by her children Frank Bonelli (Meg) of Boston, Massachusetts, George Bonelli (Judy) of Logan, West Virginia, Patty Stempsey (Chris) of Delmar, New York, and Sharon Bonelli of Rockville Centre, New York; her grandsons Alec Bonelli (Nina), Jack Bonelli, Kevin Stempsey (Maria), Ryan Stempsey and Brendan Stempsey; her sister Marie Dunn, and sisters-in-law Regina DeCourcy and Theresa DeCourcy, as well as many nieces and nephews. Bertha was predeceased by husband Richard, grandson Nick Bonelli, and siblings Eileen MacEachern, Bernice DeCourcy, Thomas DeCourcy, Reverend William DeCourcy, George DeCourcy, Theresa Moreau, Jack DeCourcy and Rita DeCourcy. Reposing at Fullerton Funeral Home, 769 Merrick Rd, Sunday, April 18, 4-7 pm. Mass of Christian Burial will be held at the Church of St. Christopher, Monday, April 19, at 10:00 am. Interment to follow at St. Charles Cemetery.

Posted by Teri and Dave Stutsrim on Apr 16th, 2021
Patty and family, I am sorry to hear of your mother's passing. What a great photo of her! I am happy to have met her a time or two and have always enjoyed her stories of her. May she rest in peace.